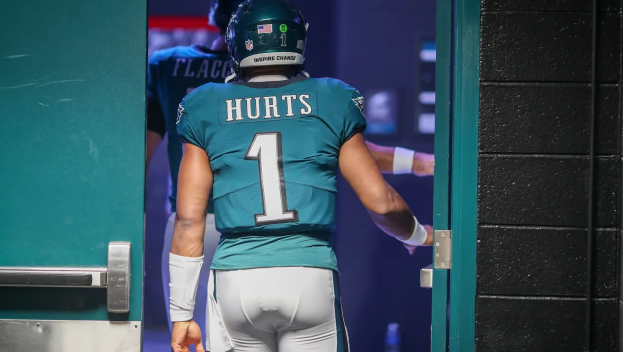 The Philadelphia Eagles will look at Sunday’s Week Two loss to the San Francisco 49ers as a missed opportunity. Sure, the 49ers did well enough on both sides of the ball to claim the victory, but the Eagles failed to make the most of their opportunities and will feel a different result could’ve occurred if they had done.

After exploding for 32 points on opening day in Atlanta, the Eagles offense mustered only 11 points on Sunday at Lincoln Financial Field. Jalen Hurts finished with 272 combined yards and one rushing touchdown, but the second-year quarterback watched as him and his offensive teammates only finished with one positive drive of the game.

There’s still plenty of more opportunities for the offense to straighten itself out, but the Eagles know Sunday’s outing wasn’t good enough.

“We had a lot of opportunities out there that we didn’t capitalize on,” Hurts said postgame. “I think that’s plain and simple right there. We have to be consistent in our execution. I have to be consistent in my execution and operation as a field general. It’s something to learn from today – a lot to learn from. They were things we could control, so that’s what hurts the most. We give credit to a good team and a good defense out there. Those wounds out there were self-inflicted.”

The Eagles had ample opportunities to walk away with a win in front of their home fans, but will feel disappointed especially after failing to take advantage of a golden chance in the first half. A 91-yard hookup between Hurts and Quez Watkins saw the Eagles have great field possession before halftime to extend its then 3-0 lead, but failed to get in the endzone on any of its four downs from inside the 49ers five-yard line.

San Francisco would later use a pair of touchdowns from quarterback Jimmy Garoppolo to take a lead it wouldn’t relinquish, eventually relying once again on its defense to shut the door. The Eagles outgained the 49ers 328-306 on the day, but could not deliver when they needed it most, suffering their first loss of the new 2021 season.

“I think that that sneak is a little bit more from a little closer to be honest with you,” Sirianni said about the Eagles failed close-yard redzone opportunities. “But, as it was in the end of the game when we snuck it when we were on the half-inch line or whatever it was. I don’t think I called good plays in that area. There are going to be times where you’re going to look at it and be like, ‘I want those calls back.’ When they work, it was a good play. They didn’t.

“So, it was my fault,” Sirianni said. “I didn’t call good enough plays right there. I didn’t put the players in good enough positions, but we’re all in this together, coaches and players.”

Hurts looked calm and composed in Week One, but couldn’t help the Eagles build off their dominant performance against the Falcons, and failed to come up with big plays inside the 20-yard line on Sunday. Now the Eagles will have an extended week of practice before traveling to rivals Dallas in Week Three, looking for needed momentum in the NFC East division race.

Dallas, like San Francisco, is missing several defensive starters, but will bring a different test for Hurts and his offensive teammates at AT&T Stadium seven days from now.

“Without watching the tape, obviously I’ve got to go back and watch the tape, but without watching it, he made some big plays with his feet,” Sirianni said about Hurts. “It’s always this fine line of, hey, throwing it on rhythm but also extending plays if something’s not there. I thought he did a really good job. There were a couple times they did a good job covering it or they got a guy through the line, and he escaped. I don’t know, did we have one sack, is that what it was? One sack? Just on third down, against a good rush like that, I mean, credit to our offensive line and Jalen in getting out of some of that stuff. But I’ll look at the tape. Initially, I’d say no, but again, you never can tell on some of that stuff until you watch the tape.”

“Absolutely. I don’t think anybody finished,” Hurts said about the team not finishing out Sunday’s game where they wanted. “I think everybody can look themselves in the mirror and think about all the stuff that we could have done better. I know I can. Everybody did not play well or perfect. But definitely that’s what film is for. We have 17 weeks for this, man. We just have to go back and get right and come back stronger next week.”