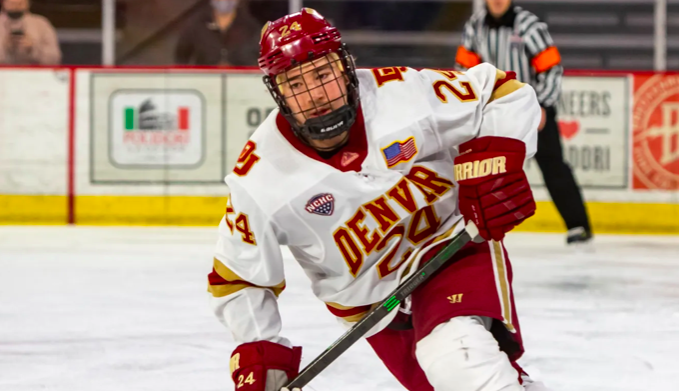 Bobby Brink celebrated a National Championship with the University of Denver on Saturday and capped off his weekend in style on Sunday by signing an entry-level contract with the Philadelphia Flyers.

Brink, the former No. 34 overall pick in the 2019 NHL Entry Draft, signed a three-year contract with the Flyers on Sunday, the team announced. His contract will begin this season as Brink becomes the fourth member of the 2019 Flyers draft class to to commit their future to the Orange and Black.

The 20-year-old Minnesota native helped the University of Denver win the NCAA National Championship on Saturday. Brink led all collegiate hockey players this season with 57 points (14 goals, 43 assists) and was also one of three finalists for the 2022 Hobey Baker Award.

“We’re very excited to have Bobby under contract after an outstanding career in college hockey that concluded with a National Championship,” said Flyers GM and President of Hockey Operations Chuck Fletcher. “Bobby possesses a high compete level combined with terrific hockey sense and offensive skill that has led him to succeed at every level he has played in his young career.”

His 43 assists during the 2021-22 season led all players in the NCAA. In each of his first two years, Brink has been named to the NCHC Academic All-Conference Team. For his collegiate career, Beink totaled 27 goals and 65 assists for 92 points in 84 games at Denver.

On the international level, Brink has appeared in two World Junior Championships for the United States and helped Team USA win a gold medal in 2021 with six points (two goals, four assists) in seven games.

The Flyers will not make the NHL Playoffs this season and have 10 games left before the regular season comes to a close.