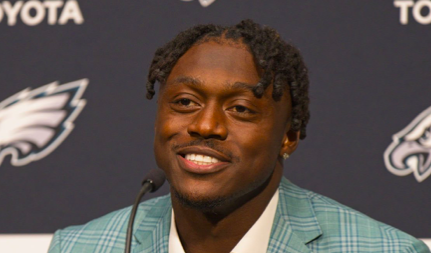 The Philadelphia Eagles already had one young wide receiver to build their offensive around in the form of DeVonta Smith and now after adding a proven leading option in fourth-year pro A.J. Brown, the possibilities are endless for Nick Sirianni’s offense.

Brown began the new chapter of his NFL career on Monday, taking part in his first press conference with the Eagles following his trade from the Tennessee Titans last Thursday. The 24-year-old ended a three-year stay with the Titans, the team who drafted him in the second round of the 2019 NFL Draft.

Now in a new city, with a new four-year, $100 million contract, Brown is looking towards the future in what could be a special Eagles offensive unit.

“I’m excited to be an Eagle and join this great organization,” Brown said. “I’m looking forward to doing anything and everything I can do to help win games. I want to win it all.

“For me, it’s just about coming in and working hard,” Brown added. “I’m still a student, too. I’m always learning and I think that’s how you continue to get better in this league. If I can learn something from another guy, that’s great. If I can teach somebody something, that’s what I hope to do.”

The Eagles desperately needed to add more skill to the wide receiver position, especially if they wanted to be a contender in the NFC East and the NFL in general. Brown has been one of the consistent wideouts in the NFL since joining, the league, totaled 2,995 yards, 24 touchdowns, and starting 11 games or more in each of his first three professional seasons.

Brown stands at 6-feet-1, 226 lbs. and brings a similar work ethic and style of play to that of Deebo Samuel and D.K. Metcalf. He brings a strong mixture of speed and physicality to the field, a key need for the Eagles offense, that has continued to search for someone to contribute consistently over the past few seasons.

He hasn’t played a snap yet for his new team, but Brown is already putting high expectations on himself and the rest of the Eagles roster as he now joins up with friend and quarterback Jalen Hurts, among others.

“My passion for the game, my passion to win, that’s all I care about – winning,” Brown said. “I’m not a big regular-season guy. I want to win it all. That’s my expectation coming into this building. I’m not putting expectations on this team, but I want to win. I know this is a great organization and a great team that can get it done.

“My style of play is going to fit in regardless, what I bring to the table and how I play. I think the sky is the limit for us,” Brown added.

Brown’s arrival in Philadelphia will give the Eagles a strong 1-2 pairing at wide reciever with the former University of Mississippi standout joining 2021 rookie Smith out wide. Jalen Reagor, Greg Ward, and Zach Pascal will all fight for opportunities in the slot this season while J.J. Arcega-Whiteside moves to tight end for hopes of increased production.