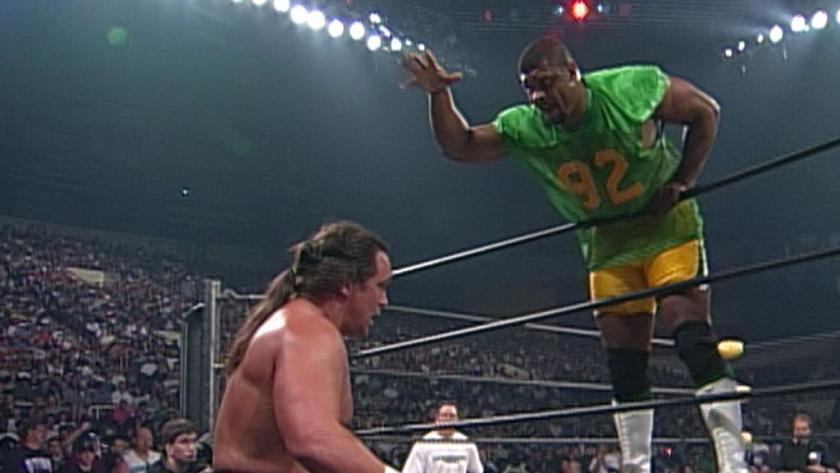 World Championship Wrestling was on a roll in 1997. With the advent of the New World Order in 1996, the company was on a rocket to the top and stayed there for a while before the World Wrestling Federation regained that spot.

But during this time, the National Football League had dabbled in professional wrestling over the years – most notably two years prior – where retired football legend Lawrence Taylor would main event WrestleMania XI against Bam Bam Bigelow. Taylor would be accompanied by his All-Pro Team, which consisted of Ken Norton Jr., Chris Spielman, Rickey Jackson, Carl Banks, Reggie White, and Steve McMichael.

That’s right – two “teammates” of that event would go head-to-head in WCW two years later! The difference here being that Steve “Mongo” McMichael was retired at this time, whereas Reggie White was still an active player in the NFL. And we break it all down for you in this classic episode.

Another active NFL player, Kevin Greene, would also main event this show alongside Ric Flair and “Rowdy” Roddy Piper to go against the Wolfpac of the nWo – Kevin Nash, Scott Hall, and Syxx.

It was quite a time in professional wrestling, and this is one of my favorite deep dives we’ve done since we started doing them two years ago.