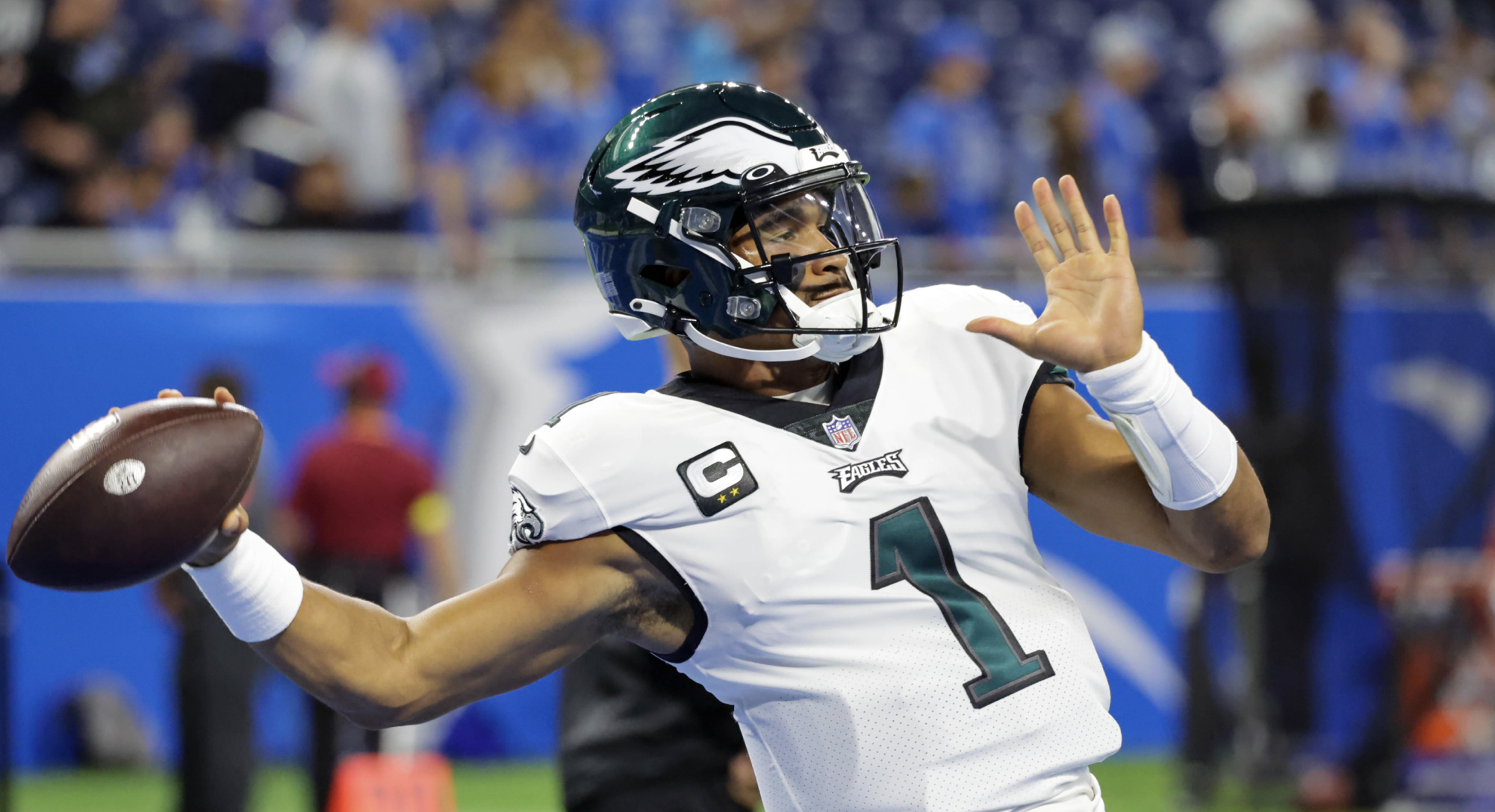 Jalen Hurts’ afternoon at Ford Field didn’t get off to the best start, but after a slow opening quarter, the third-year quarterback turned things around and helped the Philadelphia Eagles claim a first victory of 2022.

Hurts overcame an 0-for-5 start passing to finish Sunday’s 38-35 victory over the Detroit Lions with 243 passing yards, 90 rushing yards, and zero turnovers. The former Alabama and Oklahoma product helped Nick Sirianni’s men deliver a strong offensive performance against the Lions, setting the tone for what many Eagles fans hope is a strong offensive campaign this fall.

“I thought he was really efficient,” Eagles offensive coordinator Shane Steichen said Tuesday. “When you look at him, when he ran the ball, he was efficient. When he was throwing it, I thought he was really efficient. To average 7.2 yards on the pass game is pretty good. He made some tremendous throws. His accuracy was on point. I think he had about four throwaways, but overall, just a really strong performance from him.”

“That’s his thing,” Steichen said about Hurts rebounding from a poor start throwing the ball. “It’s the next-play mentality. [Head] Coach [Nick Sirianni] talks about it all the time, that next-play mentality. I think that’s where his mindset is at all the time is just continuing to grow and be on the next play. I thought he did a hell of a job bouncing back. I think everyone did. Offensive line played tremendous. Obviously, [WR] A.J. [Brown] had the big game. We made some big plays, so it was a good performance.”

Hurts managed the game well on Sunday, connecting early with offseason acquisition A.J. Brown while also helping the Eagles run the ball successfully. Miles Sanders led the way with 96 rushing yards and one touchdown while Hurts added in 90 yards of his own. Kenny Gainwell and Boston Scott also added rushing scores of their own as the Eagles kept the Lions off balanced for majority of the game.

Hurts has won four of his last six starts dating back to last season, continuing to boost his stock to remain the starter under Sirianni and Steichen. Most importantly, Hurts is making smart decisions with the football, choosing to run when needed, and not forcing passes when he is pressured.

The road won’t get easier for Hurts and the Eagles offense with the 1-0 Minnesota Vikings coming to Lincoln Financial Field on Monday before a road trip to rivals Washington Commanders on September 25. Regardless, Steichen is confident in Hurts’ abilities to win games and his offense’s ability to find ways to score.

“I think it’s just repetition with anything,” Steichen said. “He’s winning football games. That’s what you want. You want winning football, and when you win in this league, you’re going to have success.

“Anytime you score points like we did on Sunday, you’re going to give yourself a chance to win,” he added. “I told the offense this before we went out there, it’s all about points, guys. However we need to get points, we’ve got to get that done. To score 31 — I’ll take 31 plus every week, and you’re going to have a chance to win a lot of football games.”