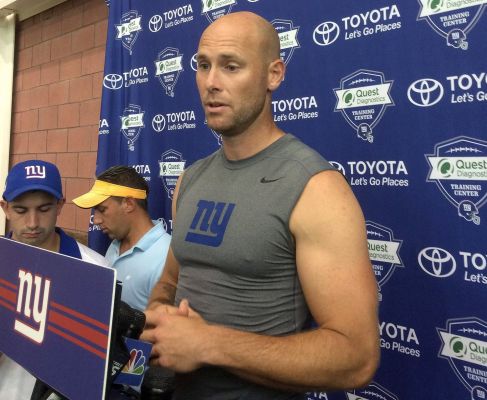 Before I begin, I want to make clear this isn’t a post bred out of the fact that it involves a New York Giant. The team Josh Brown plays for doesn’t matter. It’s the man, Josh Brown, that needs to be made an example of by the NFL.

While we poked fun a couple days ago at the Giants and Josh Brown for being suspended one game for violating the NFL’s Personal Conduct Policy, things took a very real turn when it was revealed Brown was arrested in 2015 for a domestic violence incident. Today, more details about the constant physical and mental abuse Brown inflicted on his now former wife, Molly, was made public. It’s about as sickening as it gets.

In reports and 911 tapes obtained by The News, it is revealed that police responded to the Brown house on two consecutive days. On a 911 call from the day before, Molly Brown said the kicker “genuinely got in my son’s face,” referring to her 16-year-old son, who was Brown’s stepson.

“I got really scared. And I just went and locked myself in my bedroom again,” Brown’s ex-wife said on the call. “They came last night and they said if anything else happened just to call back and I don’t want anything to get any worse.”

According to the report, police had probable cause to arrest Brown for domestic violence assault, but released on $2,000 bail. Brown re-signed with the Giants on a two-year, $4 million deal this past April. While the Giants knew about this.

“Molly described in her statement the history of physical violence against her from her husband Joshua,” the incident report reads. “Molly stated that Joshua had been physically violent to her on more than 20 different instances over the past several years. She said that Joshua became violent after she became pregnant with their daughter.”

Contary to what Brown would lead you to believe from his meeting with the media yesterday, it wasn’t just “one moment” we’re talking about here. There’s a list of incidents that allegedly occurred, dating all the way back to when Molly was pregnant in 2009.

The first of those events, she said, came sometime in 2009 when Molly Brown said she was probably between four and six months pregnant. Molly Brown said the couple were fighting, “and there was a box of mail that we had initially were arguing over, I took it, I like threw it off the desk and the papers went everywhere and he—I remember grabbing my shoulders and like just pushing me into the door.”

At one point during the pregnancy, which Molly Brown says was accidental, she said Josh Brown accused her of being a “gold-digger” and accused her of getting pregnant on purpose.

Brown also described other alleged domestic violence acts by Josh Brown in the incident report from the day of the arrest.

“Molly also said that during a recent trip to Hawaii in April of this year, Joshua got angry in an argument with her and held up his fist like he was going to punch her and said ‘I want to knock you out so bad,’ ” the incident report reads. “Molly further described an incident that occurred in April of 2014, saying that Joshua pushed her into the large mirror in their bedroom and then threw her on the floor and jumped on top of her, holding her face down into the carpet. Molly said this incident caused her pain in her arm and elbow for several months.”

Brown wasn’t just violent with his ex-wife. Molly also states he and her son were involved in an incident, and she had a protection order against Brown, but dropped it because their relationship was improving.

“In February of this year, Molly said that Joshua got into an argument with (her son) and kicked in the bathroom door. Molly said the door flew open and hit (her son) in the arm. She also said that Joshua kicked the door so hard that it broke off the hinges of the door and cracked a large portion of the door jam. Molly added in her statement that back in 2013 she had a protection order placed against Joshua. She said this order was later dropped because of the progress they had made in their relationship due to counseling.”

In the May 28 interview, Molly Brown said it took her a long time before she could gather the courage to call the police and initially would call neighbors to try and calm her husband down. She also consulted friends, including former quarterback Matt Hasselbeck and his wife Sarah and former Seahawks, Bears and Titans center Chris Spencer and his wife Katherine.

Eventually, Molly Brown said she started calling the police and estimated she had called the police 10 times prior to the incident that prompted Josh Brown’s arrest in 2015. She estimated that Brown has said he was going to kill her four or five times but added she initially didn’t think he meant it but eventually started to take him seriously.

The NFL suspended Brown one game for all of this. One game. If it was up to me, the guy would be out of the league in a heartbeat.

If Ben McAdoo really wants to put a stamp on his New York Giants, he’d cut Brown immediately. I mean, he has a no tolerance policy for domestic violence.

I don’t agree with him all the time, but Pro Football Talk’s Mike Florio put it perfectly:

It hasn’t been explained why Brown wasn’t placed on paid leave pending the completion of the league’s investigation and disciplinary process. And it hasn’t been explained why Brown received a suspension of only one game when the Personal Conduct Policy, as revised in December 2014, calls for a six-game suspension for a first-time domestic violence offender, with consideration given to aggravating and mitigating factors.

And it’s not a fair answer to cite privacy interests or similar concerns. The NFL has made its efforts to eradicate domestic violence a very public aspect of its business. The league and its teams (no matter how influential Giants co-owner John Mara may be) should not be allowed to hide behind confidentiality in matters of this nature, especially since the league and its teams routinely fail to preserve confidentiality under policies that clearly and plainly demand it.

I thought Ray Rice was the guy the NFL made an example out of. In fact, he was. But the NFL completely dropped the ball since then. And now they need to pick it up and make an example out of Josh Brown. Because a one-game suspension for all of this is ridiculous.

I wasn’t a fan of the Eagles bringing in Dorial Green-Beckham for this exact reason. I’m still not.

He was dismissed from Missouri in 2014 after an incident in which he allegedly pushed a woman down the stairs after forcing open her apartment door while trying to see his girlfriend. No charges were filed because the woman was afraid of retaliation.

Green-Beckham accepted responsibility for his actions, saying he was, “Young and dumb.”

Not good. Already seeing red flags popping up. Nobody’s talking about this incident today, and perhaps that’s because in the public’s eyes, the statute of limitations has a short shelf life.

Let’s not forget about this. Let’s not forget about any incidents involving professional athletes and domestic violence. These athletes are held to a high standard, and saying it was “just a moment” is an insult to everyone who has any semblance of common sense. Having a woman not file charges because she feared retaliation is not okay. It’s not okay because of the people who put them in that position and use their star power to intimidate them.